The birth of acne

I will always remember that fateful day when my first pimple appeared. The immense pressure of preparing for my college examinations, coupled with the increased activity of the sebaceous glands on my face, had caused a huge pimple to make its debut appearance on my cheek.

All this happened during the time of adolescence, when I was most self-conscious about my physical appearance and how my peers would think of me. Uneducated about the correct treatment methods, I started applying topical medications bought off the shelf which contained “hormones”. Of course, in my naiveté, I knew little about what these “hormones” were, and nothing else about their side effects on the skin.

After using the “hormonal” cream for the first time, while my first bout of acne did disappear temporarily, however, other spots of acne shortly kept resurfacing without respite! Panicking, I tried one “hormonal” medication after another, but the more I applied, the more acne appeared.

After entering university, I started going for intense pulsed light (IPL) and beauty saloon treatments, as well as opting for traditional Chinese medicine (TCM) to treat my condition. However, nothing I tried was able to cure this stubborn acne of mine! After all this trouble, my skin became even more sensitive and turned red and itchy easily when irritated. As a result, my acne condition after four years in university “graduated” into a more serious and more permanent form of acne.

Even into my young adulthood, I was constantly experiencing repeated bouts of acne breakouts, and this condition had accompanied me all the way past graduation, and even into the period when I got married and had a child. The hot humid weather in Singapore had also contributed to constant secretion of oil and sweat on my face, rendering my pores to be even more readily clogged by the makeup.

As such, I had signed up for more beauty packages, ranging from small beauty salons to more well-known one, and had spent almost SGD $10,000 in five years’ time! However, there was little improvement. Some of my friends suggested that I should try taking oral medicine prescribed from clinics, but as I was preparing for my next pregnancy, I did not dare risk trying that.

After giving birth to my 2nd child, I went once for a TCM face exfoliation session for “skin detoxification”, but little did I expect that this had actually caused many huge pus-filled spots of acne to break out on my chin and jawlines!

The therapists told me that this was part of the “skin detoxification” process and suggested that I should persevere with the treatments. But after undergoing four subsequent treatments, not only was there no improvement but my acne condition simply worsened and my chin and lower face looked terrible!

Acne not only had affected my appearance, but also had seriously affected my life, work and quality of life.

I was a kindergarten teacher throughout this period in Singapore. The children under my care, felt that a teacher having active acne would look “not-so-gentle” or “not -so-cute” for them. Some children even asked me naively: "What is that on your face? Is it a cherry?" This was so incredibly embarrassing. Furthermore my self-confidence also eventually got eroded to a point that I dared not to look at others in the eyes during social conversation.

By chance, I came across the story of a colleague who had a similar experience as I had in fighting acne. Seeing that her skin condition had improved tremendously, I believed in my heart that I had finally found my saviour. Upon her recommendation, I made an appointment to visit One Face Skin & Aesthetics Clinic at Tanjong Pagar area. 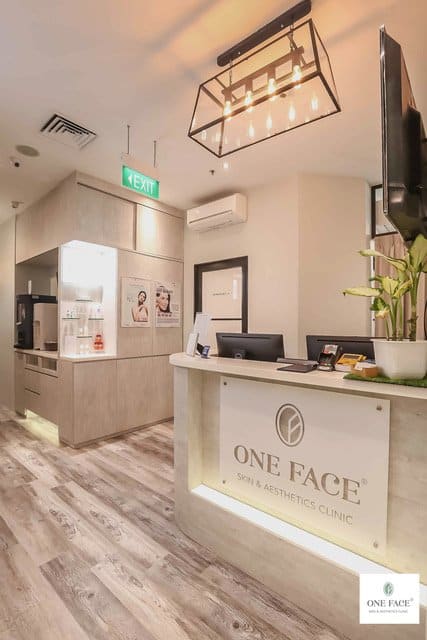 Upon arrival, the clinic assistant first cleansed my face thoroughly and then took photos that showed my full face from all angles. I then met the doctor-in-charge, Dr. David Ng C. H. After patiently inquiring about my history with acne, he carefully examined my skin condition, did a comparison of the photos, and explained the causes and symptoms of my condition.

Dr David said that my acne condition was not just a simple “teenage type” of acne, but it was, in fact, adult hormonal acne. This kind of acne usually appears along the jawline areas, and one would often experience severe breakouts during the pre-menstrual period or in times of high stress. My acne was considered relatively severe, as it had become inflamed and was filled with pus.

After the initial consultation, Dr David prescribed to me oral medications and topical applications. As I was about to end my breastfeeding phase at the time, he told me to start taking the oral medications only after my breast-feeding period had concluded. The whole consultation process made me feel very assured, and the doctor and assistants were also very enthusiastic and attentive towards my needs and concerns.

The demise of hormonal acne

During the period when I was on medications, no new acne spots appeared on my face. Every day interestingly, some clogged particles would gradually drop off from my face with the topical applications formulated by the clinic, which felt even more satisfying than popping the pimples (not advisable by Dr David though)! During this period, the acne marks had gradually faded, together with the inflamed acne.

Friends and colleagues around me were stunned when they saw me, and kept asking, "How did you clear up your acne?!" Even my husband was also pleasantly surprised and complimented, "You look prettier after your face had cleared up!"

The follow-up visit was three weeks later, where I received a treatment to remove my existing clogged pores using a laser device. This was different from the usual cleansing and extraction treatments commonly done in ordinary beauty salons. As One Face Clinic is a medical clinic, this is where the doctor can operate using medical-grade equipment that are much more effective.

Dr David explained that medical-grade equipment can penetrate into and cleanse the deepest part of the pores. Non-medical grade equipment used elsewhere can only squeeze out relatively smaller and shallower clogged pores. Large and stubborn clogged pores like the ones I had, if not cleansed and removed properly, was akin to a “time bomb just waiting for the right time to explode”, which would lead to bigger and more inflamed acne.

And so, the treatment began with the doctor’s assistant first applying a layer of anaesthetic numbing cream on my face. After about 30 minutes, Dr David commenced the treatment, targeting specific clogged pores. As it was my first time experiencing the treatment process, I was understandably a little bit apprehensive. Fortunately, the doctor’s assistant kept chatting to reassure me, continuously patting my arm during procedure to provide some form of comfort and also distraction.

The doctor was very thorough in clearing the clogged pores. After about half an hour, the procedure was completed. After that, the assistant applied a layer of healing ointment on my face which was also meant to be applied regularly thereafter for a week for post procedural care.

I felt a slight tingling sensation right after the procedure, and there were some minor redness and swelling, but everything subsided by the next day. After consistently applying the ointment for a week, the scabs on the treated area peeled off, and I was immensely happy to see my face becoming smoother and clearer, and not as bumpy anymore.

Dr David said that I was rather “lucky”, as the acne problem area was localized on the jawline and it took only one treatment to complete. For some people with full face affected, they may be required to repeat the treatment for up to three to five times.

Knowing how to seek help keeps your acne far, far away

In order to sustain the results of the successful adult hormonal acne treatment that I had at One Face Clinic, I plan to follow-up with the post treatment care here to manage my clogged pores and acne condition to prevent recurrence, with timely and results-oriented deep cleansing maintenance by the right skincare team.

Regaining an acne-free complexion has certainly boosted my self-confidence. That said, it goes without saying that putting one’s best face forward is not just for the sake of others, but for oneself as well.

Goodbye hormonal acne, although you have been faithfully following me for so many years, I am still very happy to bid farewell to you, and I hope never to see you again!

You can also e-mail me at:
askdrdavid@onefaceclinic.com

HAVE A QUESTION ON SKIN PROBLEMS AND AESTHETIC PROCEDURES?

WhatsApp or WeChat Dr David Ng at +65 9822 2989 for a faster response or Email him at
askdrdavid@onefaceclinic.com

Got questions or concerns? Feel free to send us an inquiry.

Be the 1st to know about
news and updates!

Open chat
1
Powered by
Hello. How can we help you?